It is often argued that we should understand expectations as ‘constitutive’ or ‘performative’, but more needs to be said about how this is so. How do some visions and expectations of the future emerge as accepted versions of how things will be while others do not? In what ways are these visions altered in an austerity society? What performative role is played by the discourses, events and practices associated with austerity? In what way does austerity articulate with fundamental changes in the restructuring of the state, welfare, the private sector? How do these forces articulation with personal futures, personal liability, risk and individual accountability?

In this context, this workshop explored the critical role of design in contemporary socio-­economic life. According to recent social and cultural research, design is a key aspect of reflexive and ‘knowing’ capitalism (Thrift) not least through the creation, production and staging of commodities, the qualification and circulation of ‘affective’ brands (Lury), the nature of the built environment and, more recently, the rethinking of social services and government policy. As such, design is a practice tightly bound up with and profoundly structured by efforts to know and manage the future in the present.

Here, design can be set alongside other endeavours for managing the future, including the expectations associated with novel technologies and scientific developments such as biotechnology and genetic engineering (e.g. Brown), the institutional deployment of formal future forecasting techniques (e.g. De Laat), the financial commoditisation of the future (e.g. Beunza & Stark, MacKenzie) or the identification of risks and uncertainties associated with ‘modern’ industrial society (Beck). Design, however, enacts its own particular ‘cosmopolitics’ (Stengers) played out by way of visual and material practices and devices for discerning, proposing and disseminating novel sociotechnical entities and their analogous actor-worlds.

This workshop took a practico-­theoretical approach where participants were invited to design a world and then propose interventions in relation to a world-­changing event.

Write-up of the workshop

This seminar took the form of a workshop, led by Alex Wilkie, Michael Guggenheim and Nina Wakeford - academics who work with or between sociology and design at Goldsmiths, University of London. The day focused on the topic of austerity futures via scenarios, methodologies and design interventions. 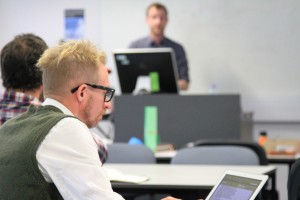 Alex Wilkie gave an introduction to the day, setting up the relationship between sociology and design and explaining some of the ways in which design might help to think about the future in ‘an age of austerity’.

Nina Wakeford gave a talk on her experience of working as a sociologist with Intel. She provided examples of specific projects and discussed ways of feeding back the research that might trouble or open up the questions and assumptions that the projects begun with. She also talked about how the experience of the research might be communicated beyond academic papers. For example, one research project in the early 2000s on the future of new mobile technologies focused on  the experience of using mobile phones ‘on the move’ in London. This question was addressed via the number 73 bus route, and – among other initiatives – by hanging large images of buses within the Intel offices to give a sense of how bicycle couriers navigate their way around urban spaces. For more on the number 73 bus route project, see Kat Jungnickel’s blog here. 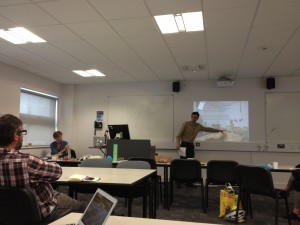 Michael Guggenheim gave a talk on his collaborative ‘Frederick and the sandbox’ project: a methodology designed specifically to examine disaster scenarios and anticipations about the future. The methodology involves participants building a world within a sandbox, which is then disrupted by a disaster of the participant’s choosing. The participant must then re-organise their world, reflecting on the decisions they make and the world they are re-building. The method seeks to both elaborate disaster scenarios that might not already be anticipated by the state, and to enact disasters through the sandbox exercise. More on the sandbox project can be found here.

Drawing on themes that emerged from the core members’ research interests in Seminar 1, participants were invited to group around the issues of debt, medicine and health and environment. 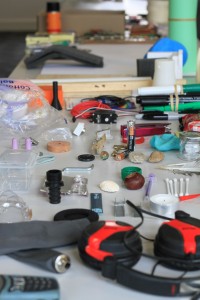 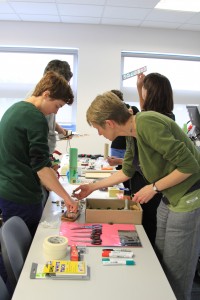 Selecting from a range of materials provided by Kat Jungnickel and Nerea Calvillo (both Sociology, Goldsmiths), each group then constructed a world. 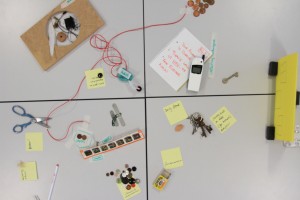 The world of debt. 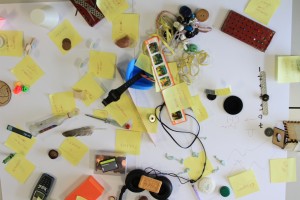 The world of health and medicine. 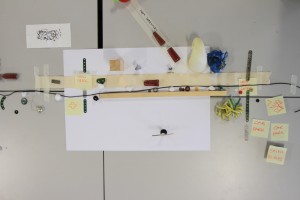 The world of the environment.

These worlds were explained to the rest of the group – and were then hit by the disaster of austerity. 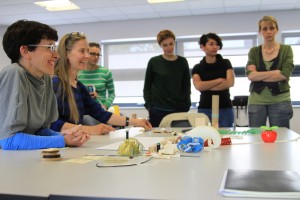 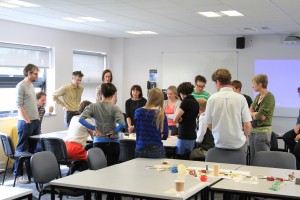 Facilitated by the leaders of the workshop, each group was asked to re-arrange their world according to the new logics of austerity, again explaining the rest of the group the changes that had taken place. 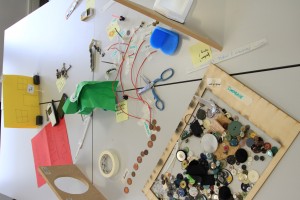 The world of debt and austerity. 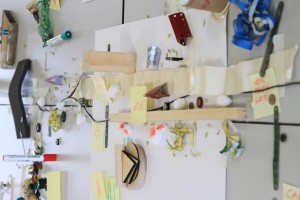 The world of environment and austerity. 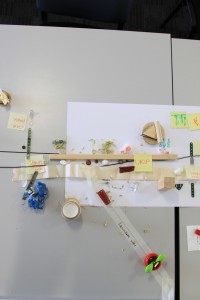 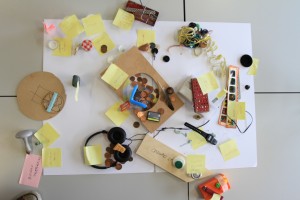 The world of health, medicine and austerity. 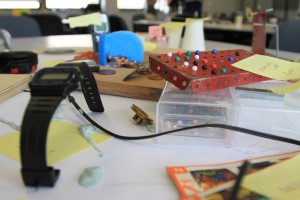 The third part of the task was to come up with a design intervention that would change the world again. Groups were encouraged to be as speculative or imaginative as they wanted – members of each group explain the thinking of each intervention below. 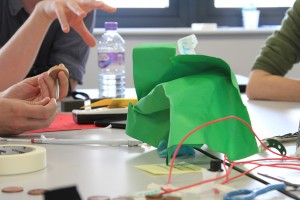 ‘At the centre of our world of debt is a thick red wire-as-relation, which connects our archetypal creditor and borrower. This relation passes through domestic spaces bubbling up with affect, sometimes morphing into fear, that grows from a bubblegum-like piece of turquoise, to a darker, larger papery mass as we push our world through conditions of austerity. Surrounding and informing this relation are others. There is our database, encased in a wooden frame, which holds within it a disparate array of information from both creditor and third parties.

As austerity bites, and as the creditor extends its search for predictive power, these fragments proliferate, to encompass behavioural traces far beyond the narrow confines of a debtor’s relationship with their credit products. Throughout, twin scissorblades loom as the promise — or threat? — of this wire-as-relation being cut.

As the grip of austerity tightens, the hope of the single, emancipatory cut weakens, as debts and connections between debtor and creditor multiply. Amongst our debtors we see metallic flashes of a response – reaching up towards… something. Shared understanding? Resistance? A new debtor public? What design intervention might we provide to coax these isolated moments into relation? A tool for debtors to declare and communally map their debts? Perhaps we should look to the database itself. What might a radical, total release of information, of both debts and assets, do? Just who holds the debts and who holds the credits?’ Joe Deville (Sociology, Goldsmiths) 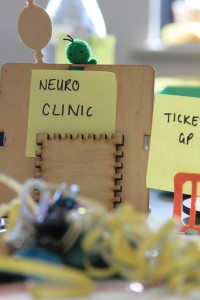 Austerity affected this world and resulted in the NHS being bought out by pharmaceutical companies, drug trials stopping, academic research groups closing down and the population of patients becoming dependent on treatments for the rest of their lives. Cities like London became ‘hubs’ of disease focused treatment that attracted all disease-related business. Oxford the ‘hub’ for cancer treatment, Edinburgh the ‘hub’ for Parkinsons etc.

Our speculative design intervention responded to this catastrophe by proposing a service provided by a private travel company like Virgin.  Virgin saw the niche in the market and provided trains that could transport you to these ‘hub’ treatment cities and provide preliminary health examinations on the way. One carriage for MRI’s, one for blood tests etc. Tickets to travel on these services would be administered by GP’s who were still distributed locally throughout the country, but with little medical or political power’. Alison Thomson (Design, Goldsmiths) 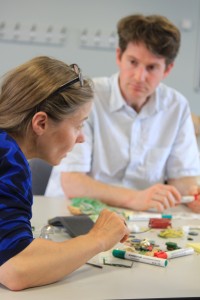 ‘Our group was organized around the theme ‘energy and environment’. Initially the difficulty we had was focusing on a particular case or controversy. One of the group suggested we take a particular stretch of road in New Cross as the constraint for the exercise. Our discussion focused around the kind of energy that might sustain and characterise this space. We mapped the key features and characteristics of this space, including the flows of people and things that moved through it.

The intervention we staged involved imagining the effects of a prolonged period of severe economic austerity on the area. The effects included deterioration of the housing stock, reduced repair and maintenance of the building fabric, and closure of a range of public and private facilities.

Our design interventions in response to this event were intended to mitigate some of its effects. We found it really difficult to agree on one single intervention – indeed the scale of the austerity we had been forced to imagine made it difficult to conceive of anything that might work effectively against it. However, we did identify possibilities in the use of some of the green space in Goldsmiths and sketched the outlines of plan to retrofit insulation and energy efficient windows to some of the older housing stock. The question of who would fund this, however, remained unanswered’. Derek McCormack (Geography, Oxford)

To draw together the various threads of the day, Nik Brown (Sociology, York) responded to the exercise, and reflected especially on ‘dark design’: that is, the ways in which both austerity and design might be entangled in the production of dystopian  futures,  and how Science and Technology Studies and Design might aid reflection on the ethics of austerity futures. 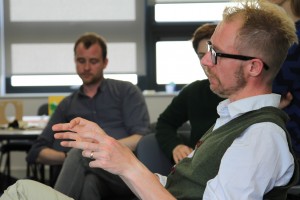 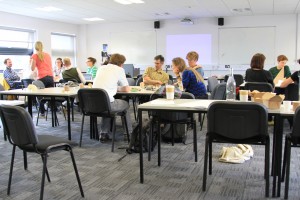 For a further write-up of the event, see Alex Wilkie’s blog here.